Explicit Tracking of Group Membership and Fast Leave in IGMP

Before I explain what and how explicit tracking of group membership works in IGMP, let me give you a brief introduction to IGMP.

A brief introduction to IGMP:

All IGMP enabled routers in a LAN run querier election and a single router is elected as querier. This querier router generates all types of IGMP queries on the LAN.

In this post, we will use IGMP version 2 to explain the concepts. 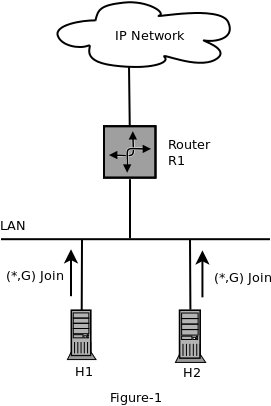 Now let us assume host H2 also joins (*,G) channel and sends out unsolicited IGMP membership report. Router R1 knows that it already has some one joined this channel so does not do anything except updating its own state timers. As multicast data is already being forwarded, host H2 starts receiving the same data traffic.

Now let us assume, H1 leaves the (*,G) channel by sending a leave message. When router receives the leave message, it lowers the state timer and sends out a group-specific query message on the LAN for the group ‘G’. H2 which is still subscribed to the same channel, replies with a membership report. Routers update the state timer and continue to forward the traffic.

When router R1 receives a leave message from H2, if router R1 can somehow figure out that H2 is the only end hosts that is interested in channel (*,G), it can stop forwarding multicast traffic as soon as it receives a leave message from H2 instead of expiring the group timer. How can router R1 figure this out? Yeah!, You got it right. Only be explicitly tracking all the end hosts interested in each channel.

A router needs to maintain some extra states to implement explicit tracking. For explicit tracking, a list of receivers (Source IP address of the IGMP group membership reports) is added for each channel. To understand how a router manage and use this state, let us look at the above IGMP message exchange again.

When H1 sends an IGMP leave, router removes the IP address of H1 from the list of receivers. Router now checks if the list of receiver is empty or not. As the list is not empty, it does not even need to generate the group-specific query because router knows for sure that H2 is still interested in channel (*,G). Did you note one of the advantages of explicit tracking? Yes, explicit tracking helps in reducing the IGMP control message traffic on LAN. Without explicit tracking, router would have sent a query message and H2 would have replied with group membership message.

Now H2 sends an IGMP leave, router removes the IP address of H2 from the list of receivers.  Router now checks if the list of receiver is empty or not. As the list is now empty, router cleans up the IGMP and data forwarding state. This stops the multicast data forwarding immediately. Router also does not generate a group-specific query message as it knows that there are no more receivers.

As IGMP protocol is unreliable (it runs directly over IP), there is no guarantee that a router has received every IGMP message an end hosts send. So with explicit tracking function enabled, there could be a case where router does not have the correct receiver list and may stop forwarding multicast traffic incorrectly.

IGMP protocol has defined a variable called ‘robustness count’ which indicates the robustness of a network. An end host is supposed to send any IGMP membership reports robustness count times. This usually takes care of the above problem.

Most of the OEM vendors support ‘explicit tracking’ or ‘fast leave’ in IGMP. If you have not been using it, please enable it and see if this helps in your network. Please do let me know your experiences with it by leaving a comment.

Bharat Joshi is a co-founder of VuNet Systems (www.vunetsystems.com). In the past, he worked as a Product Technical Architect in Infosys Ltd. Bharat has more than 15 years of industry experience in design and development of router software including various networking protocols. Bharat has contributed in several international forums including IETF, IEEE and SANOG. He is the author of multiple IETF standards related to DHCP and PIM-SM. He maintains a personal blog Bite-The-Bytes (http://bite-the-bytes.blogspot.com/).
Previous PIM Assert mechanism : Why and how
Next IP Addressing Part 1