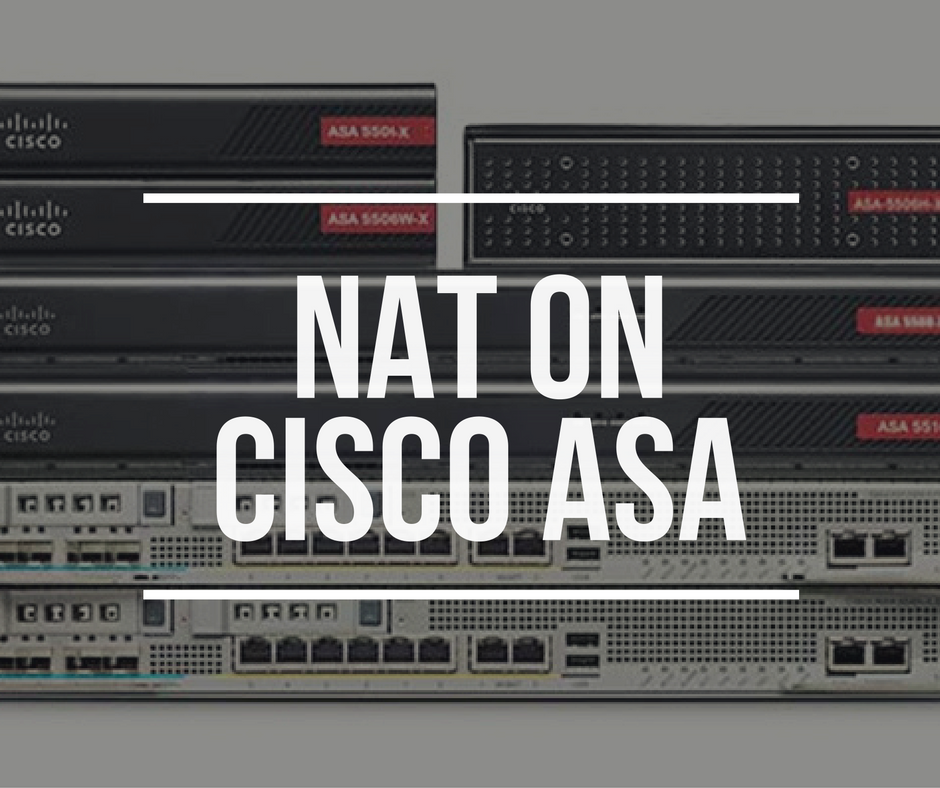 In this article, we will be looking at Network Address Translation (NAT) on the Cisco ASA. I will assume the readers of this article know what NAT and the Cisco ASA are, so I will just give an overview. In the simplest form, the Adaptive Security Appliance (ASA) is Cisco’s implementation of a firewall and one of the fundamental functions of a firewall is to sit between internal and external nodes and provide security.

The current Cisco ASA models (now with FirePOWER services) include:

The same way we have before Christ (BC) and anno Domini (AD) when talking about calendar dates, we have two main “eras” when talking about the Cisco ASA: pre-8.3 and 8.3+. These are not formal definitions but if you are familiar with the Cisco ASA, then you know things changed drastically between ASA version 8.2 and 8.3, one of them being NAT.

Side talk: don’t tell the customer but I once downgraded a customer’s firewall from ASA version 8.3 to 8.2 just so I didn’t have to worry about the NAT syntax change. Those were dark days…

Starting with ASA version 8.3, NAT can be implemented in two ways on the Cisco ASA:

Apart from the way they are configured, the simplest way to understand the difference between these two forms of NAT implementation is that Twice NAT supports more complex NAT scenarios than Network Object NAT.

We will now begin looking at different NAT types and see how they can be configured on the Cisco ASA. To keep things simple, we will begin with Network Object NAT and then consider Twice NAT in another article.

I used GNS3 in this article and my lab setup is as shown below:

Note: All devices shown in the lab setup are simulated in GNS3 and the INSIDE-PC is a router because it just makes testing easier.

Let’s talk about a real world application of Dynamic NAT. Imagine you have a network with three sides as in our lab setup: inside, dmz and outside. Some users on the ‘inside’ will frequently need to access some servers in the ‘dmz’. However, for security reasons, we don’t want to reveal the real IP addresses of those ‘inside’ users to the DMZ. Dynamic NAT is suitable in this kind of scenario.

There are a couple of things to discuss in the configuration above. First, notice that Network Object NAT is configured under a network object (hence the name) – it is configured under the network object that defines the real addresses. Secondly, notice that we specified the real (‘inside’) and mapped (‘dmz’) interfaces. Finally, we specified the “dynamic” keyword to tell the ASA that this should be a dynamic translation versus a static translation. The difference between dynamic and static translation is that traffic initiation in one is unidirectional while the other can be bidirectional. We will talk more about this later.

As you can see, the real IP address of INSIDE-PC (10.0.0.100) was translated to one of the addresses in the pool of mapped addresses (172.16.1.153) when it initiated the Telnet connection. We can use the show xlate command on the ASA to see this translation:

Note that this translation will be active for as long as the connection is active; when the Telnet session is ended, the translation will be removed (after the timeout). This means that hosts on the destination network cannot initiate the connection to hosts on the real network. That is why we say traffic initiation in Dynamic NAT is unidirectional.

Note: You cannot configure multiple NAT statements under the same network object and that’s why I created another network object for the inside network.

To test, we can open a Telnet session from INSIDE-PC to OUTSIDE-RTR and check the IP address that shows up:

So when will you use Dynamic NAT versus Dynamic PAT? When using Dynamic NAT, there’s the risk of running out of mapped IP addresses but Dynamic PAT allows you to maximize your mapped IP address especially when dealing with public IP addresses. However, not all types of traffic/applications support PAT. For example, Generic Routing Encapsulation (GRE) doesn’t use ports so PAT cannot work with GRE – no source port to translate. Here’s the final verdict: even when you use Dynamic NAT, you should configure Dynamic PAT as a fallback method.

Static NAT allows us to configure one-to-one mapping between a real IP address and a mapped IP address. One of the benefits of this is that traffic can be initiated in a bidirectional manner.

Note: There are other forms of Static NAT such as one-to-many, many-to-one, few-to-many and many-to-few.

For a real world application of Static NAT, imagine you have a web server in your DMZ that should be accessible from the Internet; you will configure Static NAT so that both the server and outside users can initiate traffic in either direction.

For our example, we will allow the DMZ-RTR to be accessed from the ‘outside’ via 192.0.2.5. Since the ‘dmz’ interface is on a higher security level than the ‘outside’, we will also need to allow this connection (from outside to dmz) in an access rule.

Note: In Cisco ASA version 8.3+, you always reference the untranslated/real IP address of a host in access rules irrespective of where the ACL is applied.

We can test our configuration in either direction: dmz to outside or outside to dmz:

In another article, we will consider more NAT types and also see how to configure Twice NAT. I hope you enjoyed this article and found it insightful.

Tip: you can also learn how to configure any Cisco ASA 5500 Firewall here, including VPNs configuration