PIM Assert mechanism : Why and how

Why PIM Assert mechanism is required: 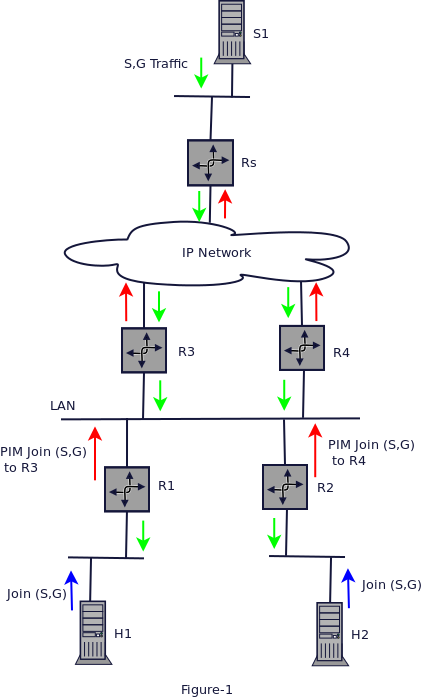 Do you see any issue with this? Yes. You are right. There will be duplicate traffic on the LAN as both router R3 and R4 will forward traffic from ‘S’. This means both hosts H1 and H2 will receive duplicate traffic. Do you think its a good idea to let this happen? Nah! So who helps us? No prizes for guessing. In such situation, PIM Assert mechanism helps in electing a single forwarder.

Is this the only configuration where we hit upon duplicate traffic issue? No. There are other similar cases as well. Let us look at them first.

The election alogirthm is such that there will always be only one winner. Let us assume that Router R3 is elected as the forwarder. So from now onwards, router R4 will stop forwarding data traffic. Let us look at states each routers maintain:

Now that we know what PIM Assert mechanism is, how a single forwarder is selected and what states are maintained by each router, let us look at the subsequent events that are possible.

Assert-winner’s assert timer is little smaller than assert-loser so that it can refresh the assert state. When the assert-timer fires in assert-winner, it sends out a assert message. This message trigger the forwarder election again but nothing changes.

When assert-loser’s assert-timer fires, it is assumed that assert-winner is no more the assert-winner. Assert-loser removes the assert state and returns to the normal state. This means that RPF neighbor for channel (S,G) in downstream routers changes to what the unicast routing table suggest and if they still desire to join channel (S,G), they switch to the original PIM neighbor.

When assert-winner is no longer forwarding data traffic for a channel, it sends out a assert-cancel. Assert-cancel is handled similar to how a ‘assert-timer’ firing is handled in assert-loser.

All vendors support PIM Assert on multi-access LAN interfaces. An administrator cannot disable this feature as the only configuration available is the value for assert-timer.

I hope this clears any doubt you ever had on PIM Assert Mechanism. As there are multiple possibilities, please do let me know if you want to discuss any specific network configuration by leaving a comment below.

Bharat Joshi is a co-founder of VuNet Systems (www.vunetsystems.com). In the past, he worked as a Product Technical Architect in Infosys Ltd. Bharat has more than 15 years of industry experience in design and development of router software including various networking protocols. Bharat has contributed in several international forums including IETF, IEEE and SANOG. He is the author of multiple IETF standards related to DHCP and PIM-SM. He maintains a personal blog Bite-The-Bytes (http://bite-the-bytes.blogspot.com/).
Previous Getting Going with Cisco Router Simulators
Next Explicit Tracking of Group Membership and Fast Leave in IGMP