What is Network Performance Monitoring (NPM)?

Kentik’s NPM solution goes beyond typical NetFlow traffic analysis in that it is enabled through the installation of an nProbe application on Linux based servers. The probe captures packets from sampled flows of live, incoming and outgoing traffic and sends that information to Kentik Detect in IPFIX packets.

What’s the benefit of this you ask? Well, as the probe is installed on the server itself, it is privy to information which NetFlow devices are not.
As per Kentik’s nProbe documentation, hosts which have the probe installed generate four additional metrics that are sent to the Kentik Detect back-end:

Further to this, the metrics are seamlessly added to the Data Explorer if the selected device(s) have the probe installed. For example, as per the image below, when I select the two “nntp” hosts and then click on the “Metric” dropdown menu, I’m provided with the standard metrics as well as the additional augmented metrics. 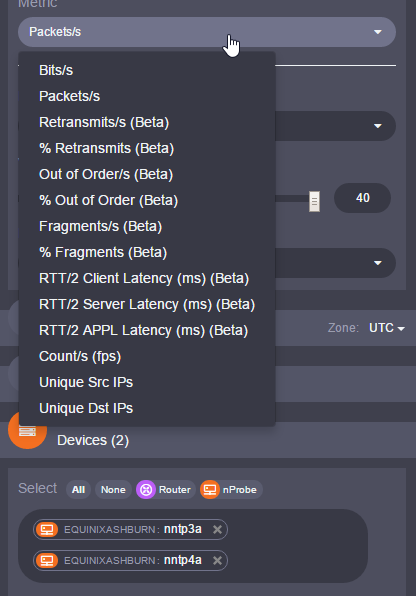 On the other hand, if I select hosts which do not have the probe installed, these metrics are not displayed. Sure it’s a little feature, but it’s nice nevertheless as it avoids the need to memorize which hosts can and which cannot use these metrics.

Do I Need the Additional Visibility?

Yes! Here are just some of the issues you can identify using the augmented metrics:

Let’s take a look at how we can use the “% Retransmits” metric to see how we can gain a deeper understanding of what is causing packet loss in a network.

With the metric selected, along with the “Destination IP/CIDR” dimension, our graph looks like this: 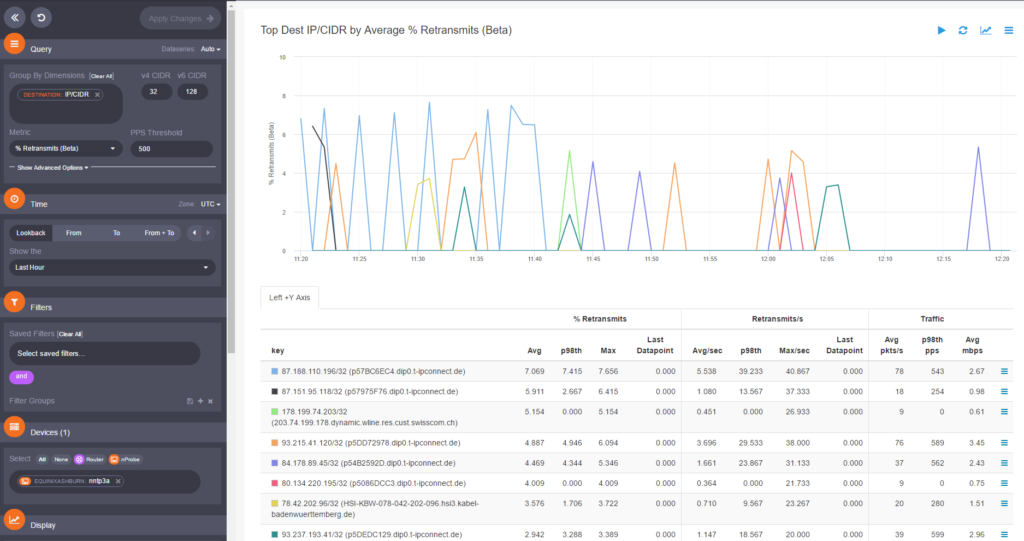 What we see here is the percentage of retransmits to specific servers. This is a great start though this information doesn’t tell us which application(s) are experiencing the retransmissions. Adding the “Destination Port” dimension provides us with that visibility:

But now let’s say that we no longer think the issue is specific server or service related. What could we do if we thought the issue was path related? We could remove both the “Destination Port” and “Destination IP/CIDR” dimensions and replace them with “Destination AS Number”. What this does is it gives us an AS level view of where packets are being retransmitted: 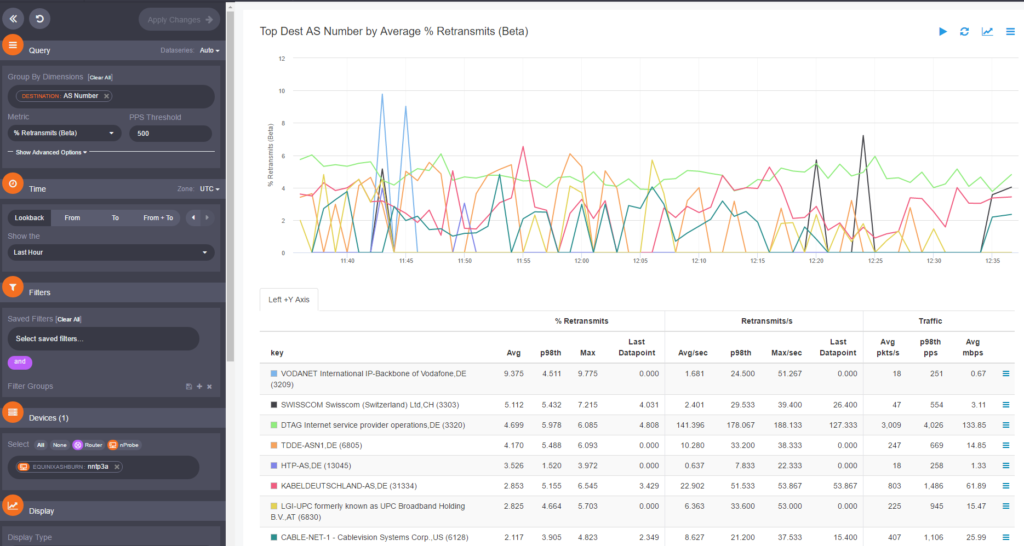 As we’ve just seen, using these augmented metrics in conjunction with the preexisting dimensions provides us with new levels of visibility which were not available to us previously.

Kentik’s Go Big (Data) with Network Performance Monitoring article does a great job of explaining how Kentik themselves used NPM to identify a micro-bursting issue within their own network. By installing the nProbe agent on their servers they were able to immediately see that some servers were retransmitting over 4% of their packets.

In the time since the publication of the above-mentioned article, Kentik again used NPM to troubleshoot another network issue. Through the use of Kentik Detect, the engineers were able to see that some customers were suffering from BGP instability issues shortly after they performed a software update.

Aren’t these the type of issues we’re all afraid of?

Instead of rolling back the update in haste, the engineers began troubleshooting the issue to find out if it was due to their network and/or application, or by something outside of their control.

The first thing that they did was use the “% Retransmits” metric in conjunction with the “Destination IP/CIDR” dimension and a filter which showed only BGP traffic. Doing so produced the following:

In the interest of being thorough, the engineers then looked to their servers as being a possible cause of the issue. In an effort to confirm (or rule out) their servers, they added the “Full:Device” dimension to their analysis. Doing so displayed information pertaining to the customer devices and the corresponding Kentik servers which handle the BGP sessions:

As we can see in the right-hand side of the ‘Key’ column, each customer device connects to a different Kentik (C00x) server. This, therefore, lead the engineers to believe it would be unlikely that the issue is being caused by their servers and that they need to start looking further  abroad.

To do this, they began by removing the “Full:Device” dimension and replaced it with the “Destination:Country” dimension:

As per the table in the image above, we can see that doing this identified that the issue appeared to be affecting traffic which was destined for Singapore (SG). Not satisfied with this level of information, the engineers took it one step further and replaced the “Destination:Country” dimension with the “Destination:BGP AS Path” dimension.

As the name suggests, this dimension reveals the AS path the traffic takes to the destination. Looking at the table we see that the three devices travel an extremely similar path. Given this commonality, it is safe to assume that the issue resides in one or more of these Autonomous Systems.

Because these AS’s are outside of Kentik’s control, the engineers were unable to troubleshoot the issue any further. Nevertheless, this wealth of information not only allows Kentik to confirm that their infrastructure isn’t misbehaving, it also allows them to assist third party provider(s) in identifying the area in which they are experiencing an issue. How fantastic is that!?

The nProbe agent adds more features to an already fantastic product. Kentik Detect does a great job of providing traffic visibility, but the nProbe agent takes it to a whole new level.

While performing packet captures at multiple points in your network is a great idea when you’re troubleshooting an issue, it can be very time-consuming. Further to this, you need to ensure your captures are running before the issue occurs again in order to be able to analyze the data. On the other hand, as the nProbe agents are collecting data before, during and after the issue, you’re able to start your analysis immediately.

What we really liked is that nProbe is much more that a simple NetFlow probe. NetFlow is the de-facto standard for network traffic accounting, but nProbe includes both a NetFlow v5/v9/IPFIX probe and packet capture (pcap) function that can be used to increase the available metrics.

Another great feature of nProbe is the availability for Linux, Windows and embedded system such as ARM and MIPS/MIPSEL.

The supported layer-7 applications are more than 250, including the most popular Skype and BitTorrent. Last but not least, both IPv4 and IPv6 are available.

All in all it’s a great feature and I really can’t think of a reason why you wouldn’t want it running on your servers.

Will is a senior systems engineer who works in both the enterprise and data center space. His skills cover routing and switching, security, cloud, visualization and storage. When he's not working he's usually labbing, studying or helping out on I.T forums. He also owns and runs the oznetnerd.com blog.
@OzNetNerd
Previous NAT on Cisco ASA (with GNS3 config)
Next pfSense vs Cisco ASA: which firewall is better for your network? 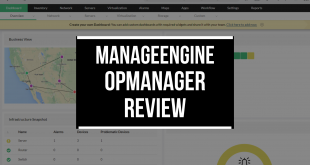 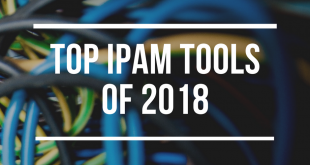 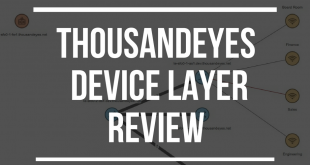