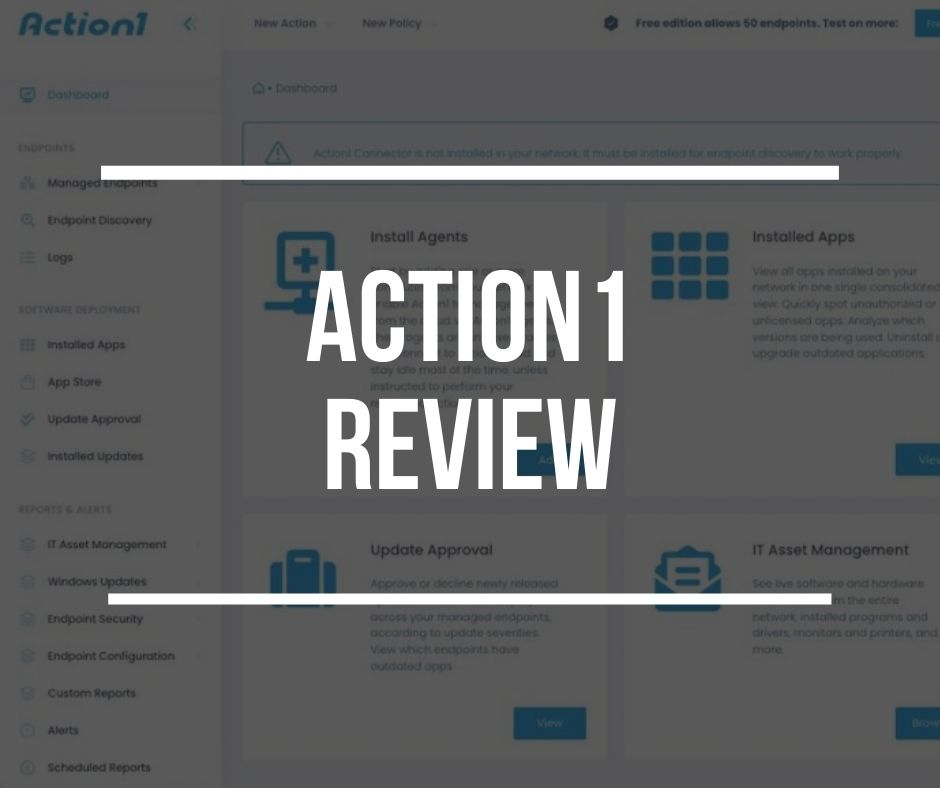 Action1 RMM promises to deliver a comprehensive suite of remote management functionalities in a single cloud-based platform. In this review, we’ll walk you through its main functionality.

After creating an account, the user can log into the main Dashboard of the app, where it’s possible to download the Action1 Agent package by clicking on the Add button in the Install Agents view.

After downloading, the app first requires the Action1 Agent to be installed to securely connect to Action1 Cloud using an embedded authentication certificate and private encryption key specific to your organization.

Therefore, the Action1 Connector will be automatically added to your account without any need to use tokens or other forms of authentication/bind.

The following screenshot shows that an unattended silent installation is possible using the given command line string.

This would be extremely useful in the case of large-scale deployments, allowing to silently add the package without interrupting the end-user session.

Another installation option is to use the company’s existing automation tool to assist the deployment of the Action1 Agent on any number of target machines.

When the Action1 Agent is installed, it connects to the Action1 cloud, and shows you the confirmation that includes the machine’s IP address.

In the Managed Endpoints section, you can see the list of all the managed endpoints in the network, along with some details such as the machine name, username, and operating system.

Once the Action1 Connectors are installed, all the Action1 functionalities become available.

A useful little feature is the grouping capability, which enables partitioning the installed Action1 Connectors into groups.

The embedded logic allows you to include/exclude conditions based on parameters such as the operating system, endpoint name or IP address.

Once the Action1 Agent is installed on a target machine, it is possible to perform any of the following actions:

One of the most exciting features of Action1 is remote access. This function is accessed using an Actions button in the Managed Endpoints section.

By clicking Remote Access, a new tab will open in the browser—allowing a full remote desktop session with the target machine, including mouse and keyboard control.

The beauty of this feature is that all you need is the Action1 Agent. No other third-party software is required!

The second functionality that we will test is the patch management feature.

Once clicked, the app will show which updates will be pushed to the machine, allowing filtering based on ALL / CRITICAL ONLY / SPECIFIC SELECTED UPDATES.

Another nice feature is the ability to specify approval and the reboot mode (i.e., automatic or manual). A custom message can also be added that is visible on the screen of the target machine user.

The same update settings can be applied to one or multiple machines, as shown in the second step of this process.

To complete the process, there is the option to specify the schedule used to deploy the update: immediately, at a specified time, monthly or weekly.

After the action has been completed, a summary of success/failure is displayed.

Before proceeding, the tool allows you to accept the mandatory EULA on behalf of all of your managed organizations. It’s not possible to proceed without completing this step.

The Select Endpoints and Schedule tab are identical to those presented previously; hence we’ll skip them here.

But, you can see that on the target machine, we now have Skype and Zoom installed with shortcuts on the desktop.

After completion, you can also see a detailed log of the actions taken during the process.

The App Store section of Action1 RMM lists the applications that can be deployed to the target machines. The App Store comes preloaded with a number of apps.

The app library can be used to install and uninstall apps on the target machines.

In the Installed Apps section, you can see all the installed applications,  and on which machine specifically each one is installed (see the SHOW button in the following screenshot).

Moreover, you can add custom packages to the App Store as you wish.

It is worth noting that the applications are downloaded from the Action1 Cloud to the target machines using a secure peer-to-peer (P2P) file sharing technology.

For example, let’s say that 100 target laptops on the same LAN/network require the same 200 MB application to be installed on each of them.

Instead of each laptop downloading the package entirely (which would cause a 100 * 200 MB = 20,000 MB of consumed bandwidth on the network!), each one of the Action1 Agents downloads a little random piece of the app from Action1 Cloud, then shares those pieces with agents running locally on the same network.

The result is that the actual external bandwidth usage will be very close to the original package’s size, instead of being multiplied by the number of machines needing the app to be installed. Smart!

The workstation patch management can be automated with the use of Policies. In the section Policies > Definitions you can create the logic controlling this process.

After selecting which updates need to be deployed, you can select the group of the target Action1 Agents and the frequency of this operation.

If certain endpoints are powered off or offline at the scheduled time, the policy will run as long as it is powered back on within the MSTF.

The default MSTF is seven days for monthly repeating schedules and 24 hours for all other types of schedules, including Run now.

Action1 provides Group Policy to automate the deployment of the Action1 Connectors on multiple workstations or servers at once.

With Group Policy, Endpoint Agents will be distributed to the target machines and installed without direct supervision.

This option is effective if the target machines reside in the same domain.

It is possible to generate reports or monitor specific events and get alerted as soon as they occur. The complete list of available reports is available here.
Reports can be run on-demand or scheduled, allowing maximum flexibility of use.

If you browse the Reports & Alerts section of the app, you can drill down information and details related to specific machines and groups. For instance, in the screenshot above, you can see the report about Installed Software on all the monitored machines.

Other useful reports that we tested included:

The list of available ready-to-use reports is pretty extensive, so a lot of regular auditing can be performed just by scheduling those deliveries.

You can also create Alerts based on the available reports.

The next screenshot shows how to create an alert on missing critical updates that will send a notification email to the specified email address.

Action1 enables the automation of tasks and integrations with third parties through a RESTful API.

All the Action1 Agents’ data can be accessed via API, as well as it is possible to generate reports and lists of installed endpoints. Action1 API leverages standard HTTP requests with JSON-based request bodies.

The full Action1 documentation can be found here. In addition to the articles, support can be obtained via Action1 Discord Server where product specialists respond within 24 hours.

Action1 has proved to be a very effective tool in the RMM space, and it does what it promises simply and efficiently.

It allows very easy management of large workstations fleets along with the flexibility to customize settings at each stage of the process.

For those who want to try it out, we recommend beginning with the Action1 free edition with 100 Endpoint Agents included. You can manage up to 100 machines for free using all Action1 features, plus email support if you need help.

Managing more than 100 machines with Action1 RMM costs $2 per month per device, including all features and phone support. You can cancel anytime.