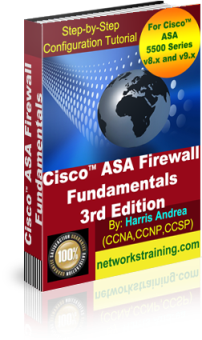 The Cisco ASA 5505 Firewall is the smallest model in the new 5500 Cisco series of hardware appliances. Although this model is suitable for small businesses, branch offices or even home use, its firewall security capabilities are the same as the biggest models (5510, 5520, 5540 etc). The Adaptive Security technology of the ASA firewalls offers solid and reliable firewall protection, advanced application-aware security, denial of service attack protection and much more. Moreover, the performance of the ASA 5505 appliance supports 150Mbps firewall throughput and 4000 firewall connections per second, which is more than enough for small networks. In this article, I will explain the basic Cisco ASA 5505 configuration for connecting a small network to the Internet (here the complete guides).

We assume that our ISP has assigned us a static public IP address (e.g 200.200.200.1 as an example) and that our internal network range is 192.168.1.0/24. We will use Port Address Translation (PAT) to translate our internal IP addresses to the public address of the outside interface. The difference of the 5505 model from the bigger ASA models is that it has an 8-port 10/100 switch which acts as Layer 2 only. That is, you can not configure the physical ports as Layer 3 ports, rather you have to create interface VLANs and assign the Layer 2 interfaces in each VLAN. By default, interface Ethernet0/0 is assigned to VLAN 2 and it’s the outside interface (the one which connects to the Internet), and the other 7 interfaces (Ethernet0/1 to 0/7) are assigned by default to VLAN 1 and are used for connecting to the internal network. Let’s see the basic configuration setup of the most important steps that you need to configure.

Let’s now have a look at the Cisco ASA 5505 configuration, in a step by step fashion.

Step 4: Enable the rest interfaces with no shut

Step 5: Configure PAT on the outside interface

From March 2010, Cisco announced the new Cisco ASA software version 8.3. This version introduced several important configuration changes, especially on the NAT/PAT mechanism. The “global” command is no longer supported. NAT (static and dynamic) and PAT are configured under network objects. The PAT configuration below is for ASA 8.3 and later:
object network obj_any
subnet 0.0.0.0 0.0.0.0
nat (inside,outside) dynamic interface
The above commands will accomplish the same task as the “global” and “nat” commands we had in versions prior to 8.3.

Default route towards the ISP (assume default gateway is 200.200.200.2)
ASA5505(config)# route outside 0.0.0.0 0.0.0.0 200.200.200.2 1
The above steps are the absolutely necessary steps you need to configure for making the appliance operational. Of course there are much more configuration details that you need to implement in order to enhance the security and functionality of your appliance, such as Access Control Lists, Static NAT, DHCP, DMZ zones, authentication etc.

You can also learn how to configure any Cisco ASA 5500 Firewall Here and also VPNs.

For more Cisco configuration examples and other related details about designing and implementing Cisco solutions: Cisco Tips and Tutorials.