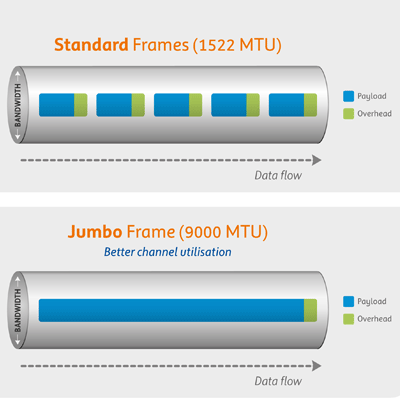 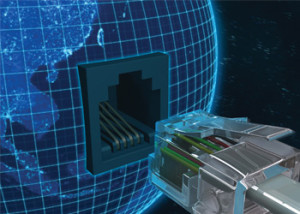 There seems to be a growing argument lately over network optimization and the use of Jumbo Frames.  With the cost of Gigabit networking continuing to go down, and 10 Gigabit (and greater) networks becoming more affordable, the impact of this decision is becoming more and more important.

Knowing how and when to use jumbo Ethernet frames is key to understanding how to optimize network performance.

As Ethernet networks grow along with increasing bandwidth requirements, so does the requirement for a more optimal network.

Gigabit networks which were at one point part of the core infrastructure, have given way to Ether-Channel and larger 10 Gigabit, 40 Gigabit and now even 100 Gigabit networks.

All of these bigger networks allow for more data to be transferred in the same amount of time.

Most people will incorrectly state that the network speed is increasing, but in reality it is the amount of data transferred not the speed.  All networks run at about the same speed bound by Einstein’s Relativity theory and the speed of light.

One thing that isn’t changing much is the Ethernet frame size.  Many inexperienced network engineers will setup a network switch right out of the box and never adjust the MTU size to accommodate for the type of Ethernet network they will run.

This works great on most gigabit networks but in some circumstances (depending on the application) increasing the frame size to 9000 bytes (Jumbo Frames) can improve the overall performance.

What are Jumbo Frames and When Should You Use Them

Jumbo frames are any Ethernet frame that has a payload larger than 1500 bytes.  When you think Jumbo frames most people think of a frame that can carry a maximum payload of 9000 bytes.

Most Ethernet switches today support jumbo frames, but must be configured to do so in order for this to work correctly.

Why Do We Need Jumbo Frames

Understanding the applications that ride on your network will help you understand if enabling jumbo frames can help your overall network performance.

Applications such as NFS that operate using 8KB datagrams are perfect for jumbo frames.  Storage networks are also a perfect example of this.  8KB datagrams fit perfectly into the 9000 byte payload of a jumbo frame.

All is not roses in the land of Jumbo Frames. Jumbo frames aren’t for all situations.  Low bandwidth circuits or applications that are highly sensitive to latency, jitter, or delay (such as multimedia applications, VoIP, etc.,) will not work well with jumbo frames.

How to Enable Jumbo Frames on a Cisco Switch

Enabling jumbo frames on a Cisco switch is fairly simple. Depending on which device you have will depend on the exact commands you need to use to enable jumbo frames.

Remember the 9000 byte MTU is the MAXIMUM transmission unit size.  Ethernet is flexible layer 2 protocol and will adjust for smaller frame sizes.  However latency sensitive applications must be treated separately and will not function optimally on jumbo frame networks.  Segmenting standard Ethernet frame networks to their own VLAN is the best way to ensure optimal network performance for all applications and is the best way to allow for both types of networks to coexist.

Have comments or question?  Leave a comment below and let’s talk about jumbo frames.