Whether you are preparing for the Cisco IP Routing exam or you are an experienced network engineer planning to implement the Open Shortest Path First (OSPF) routing protocol, you should familiarize yourself with the capability to divide your network into separate OSPF areas. Using multiple OSPF areas reduces the frequency of SPF (Dijkstra) calculations, the size of routing tables, as well as LSU overhead, and therefore improves network performance. Also, dividing an OSPF network into areas makes it more manageable, especially if it gets larger.

In this article, I will explain different types of OSPF areas, and when should you consider dividing your network into areas. Even though I will give a brief introduction into some basic OSPF concepts, it is assumed you have a prior knowledge of the OSPF (CCNA level).

In order to understand OSPF areas, you should be aware of a few important things regarding the OSPF routing protocol. Except the fact it is a link-state routing protocol (it has a complete picture of the network; routers send the state of their own interfaces/links to all other routers), which I am sure you all knew, OSPF implements a two-layer area hierarchy: the backbone area, also called OSPF area 0, and the regular (nonbackbone) area. The main difference between these two areas is that the backbone area represents the core of the network and provides the fast movement of network traffic, while the nonbackbone area connects users and resources. So, the backbone area is the main area to which other areas connect, either physically or by using OSPF virtual links, to exchange and route information. Also, users are not generally placed within a backbone, but within nonbackbone areas which will be explained in further text.

With respect to the area(s) they interconnect to, we differentiate between internal, backbone, ABR (Area Border Router) and ASBR (Autonomous System Boundary Router) OSPF routers.

Note: A router can be of more than one type simultaneously. For example, if it is connected to the backbone and nonbackbone area, and to a non-OSPF network, it is both an ABR and an ASBR.

We also distinguish between different types of routes in routing tables:

Note: E1 are type 1 routes – used when there are multiple ASBRs advertising a route to the AS; external cost is added to the internal cost of each link [have cumulative cost]

E2 are type 2 routes – used if only one router is advertising a route to the AS; external cost does not change [have static cost]

The same applies to O N1 and O N2 routes.

Now that you know the basics necessary to fully understand OSPF areas, we can discuss about different OSPF area types.

Standard Area – a nonbackbone area that must be connected to the backbone area; it accepts intra-area, inter-area, external and a default route

Totally Stubby Area – Cisco proprietary; does not accept external AS routes or inter-area routes; recognizes only intra-area routes and the default route

NSSA – recognizes intra-area, inter-area routes and the default route (0.0.0.0); allows external routes from an ASBR but these routes are marked with O N1 or O N2

Totally Stubby NSSA – Cisco proprietary; does not accept external AS routes or inter-area routes; recognizes only intra-area routes and the default route; allows local ASBR only and thereby external routers this router inserts into the area are marked with O N1 or O N2

Refer to the following figure to understand OSPF area types: 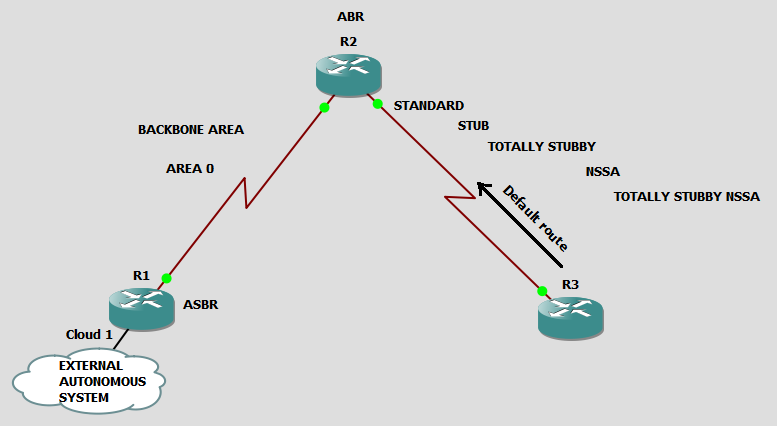 You may as well find the following mental map useful (crossed marks are not recognized in the area): 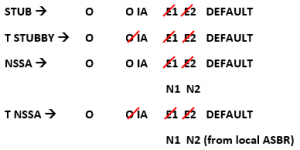 Dividing your network into areas limits the impact of a topology change within an area and minimizes routing table entries, and thereby improves the performance of your network. Even if your network is small and there is no need to divide it in multiple areas momentarily, you should bear this in mind. Namely, even small networks have a tendency to grow, and you should consider implementing areas for possible future expansions.

Also, if you want to control the advertisement of inter-area and external routes into an area, you should definitely consider implementing one of the OSPF special areas (stub, stubby, NSSA, totally stubby NSSA), depending on your needs. It is recommended that an area has no more than 50 routers, and that a router is not a part of more than three areas.

Note: If you are preparing for the CCNP Route exam, you should have a good understanding of OSPF area types and the reasons for creating an OSPF network with multiple areas. You may expect questions such as which routes are allowed by a particular OSPF area or when will a router in an OSPF nonbackbone area receive a default route from the ABR or ASBR.

If you would like to know more about OSPF, feel free to leave your suggestions and comments.

Happy networking, till next time!

Ingrid Belosa is a networking enthusiast from Croatia. She is here to help you with grasping networking concepts.
Previous Router Stuck in ROMmon Mode
Next Time–Based Access Control Lists 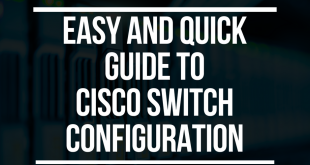