An Introduction to Wireless Networking Standards

Way back in the early days of Wireless LAN (WLAN) development, there were a whole lot of folks trying different types of technologies to get wireless LAN communications to work.  Eventually some clear winners started to rise to the top and it was seen that interoperability between these technologies needed to exist.  It was this desire for inter-operation that eventually led to the creation of the wireless LAN standards that we have today.

But what are standards? Standards allow companies who build wireless networking devices know that their equipment will work with other manufacturer’s wireless equipment. These standards are known today as IEEE 802.11a, 802.11b, 802.11g and the most recently ratified 802.11n.

Jamming out to the Band 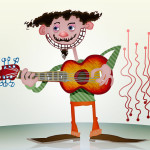 I’m a big music fan and love a great band.  But today we’re talking the radio frequency band.  This was thought by many to be the best band for commercial inroads to consumers.  The problem was and still is today is that its a very crowded RF band that’s used by most home appliances including things like your microwave oven!

At the beginning of any new technology,  inventors and technology developers tend to each take a different view on the specific technology at hand.   Wireless networking was no exception.  At that time players within the industry were looking at all types of methods of transferring LAN data without the use of wires.  As things evolved people realized their technologies weren’t compatible with each other.   Again, Standards were needed to help move the technology to consumers and businesses.

To be honest standards don’t always necessarily help get the technology to consumers quickly but it does ensure interoperability when it does get to the consumer.

Eventually certain functions, features and terminology that were common among each manufacturer got taken into the standard. It essentially became a popularity contest of features or terminology.

And the winners of the Wireless Networking popularity contest are:

These are just a few terms that made it into the standard and all of these date back to the first 802.11 wireless networks.

IEEE 802.11b was the first major upgrade to the WLAN specification.  It was exciting news because this new standard ratified the wireless speeds up to 11Mbps.   The typical range for an IEEE 802.11b wireless network is about 100 feet (30 meters) or so depending on the environment.

Though the radio band was still over crowded, the 802.11b standard provided much needed relief for places not accessible by wire AND at a decent usable speed. 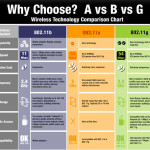 The next major improvement in WLAN networking in the 2.4 GHz RF band was IEEE 802.11g.  The “g” standard provided for even more network speed allowing up to 54Mbps AND was an easy upgrade for users of 802.11b as the new radios was backward compatible.

802.11g was able to achieve these cool new speeds through the use of Orthogonal Frequency Division Multiplexing (OFDM).  Multiplexing is a technology that allows you to take multiple pieces of data and combine them into a single unit to be modulated and sent over the same radio channel. What OFDM does is, it takes the data that needs to be transmitted and breaks it up into 52 sub-carriers that are all multiplexed together into a single data stream. Since there are 52 sub-carriers the final data stream can be sent at a slower rate, provide better reliability, sent a great distance and yet deliver more data.

While IEEE 802.11b was gaining wide acceptance in the 2.4 Gigahertz band, 802.11a was quietly getting some use in the 5 Gigahertz RF range.

The biggest problem was that it wasn’t compatible with devices that ran in 2.4Ghz band, namely 802.11b and g.  And it tended to be a bit more expensive (at the time).

Today’s Wireless Networking technologies allow you to  operate in both frequencies.

IEEE 802.11n uses both OFDM and MIMO (multiple-in multiple-out) RF modulation techniques.  This allows for a maximum throughput of 600Mbps using four MIMO streams or 150Mbps using a single stream.   It operates in both RF bands, 2.4 GHz and 5 GHz and is backward compatible with the other standards.

The biggest problem with 802.11n is that it has only recently been ratified and many device manufacturers have not released firmware updates for the new standard.

All in all WLAN technologies have come a long way and are getting better every day.  They’re more secure, faster, cheaper and more scalable.    It easy to see that every day we are becoming more and more connected.  And wireless networking has just begun to become part of the overall network infrastructure.